>
>
Having  traveled the world long before I moved to Singapore to live and work there in the early 80’s, I remember how much I was looking forward to finally learn how to prepare “real” Singapore Noodles. By then I had enjoyed them in many Chinese restaurants all over the world and they had become a trustworthy (most of the time, anyway) shoe-in if nothing else appealed on the menu to my at that time still rather newfound love of Chinese food . Much to my surprise, there were no Singapore Noodles to be found anywhere 😦
It then did not take me long to find out that Singapore Noodles are NOT a Singaporean dish but have probably been invented years earlier in Hong Kong.
(As far as I know, the verdict of its true origin is still not entirely agreed upon) 🙂
While there are many different variations, the most common one I have encountered in my travels and here in the USA contain rice sticks, curry, scallions, soy, garlic, ginger, vegetables, shrimp and chicken or pork.
The following version is more or less the one I have cooked for many years, only making slight changes to the ingredients if something is not readily available or leftovers beg to be utilized, such as roast pork, squid, bok choy, celery, etc.
>
>
Bon Appétit !   Life is Good !
>
>
Click here for more  Asian Style Noodles  on  ChefsOpinion
>
>
>

remove chicken and shrimp from the pan, set aside (the carry-over heat will continue to cook them through)

stir fry the onions in ame pan/wok until translucent

add the cabbage, chillies and scallions, saute another minute

remove veggies from pan, set aside

in 1 tblsp peanut oil, stir fry 1 pck soaked rice sticks for two minutes soak according to your preference, I like to soak them for 10 minutes)

scramble the eggs until set

return the veggies, shrimp and chicken to the pan, add the seasoning/sauce, stir fry until all is well mixed

>
>
If  you never tried  Panzanella, chances are that a dish using stale bread is on the bottom of your “must try this” list.
After all, nowadays stale bread is usually used either for bread pudding, bread dumplings, or, most likely of all – thrown into the garbage bin.
Now, I have to admit that most bread you can buy is best thrown away after a few days, since it was nothing special to begin with. But if you are a fan of really good bread, it would pain you to throw away some of it just because it has survived a few more days than usual and has become a bit stale. If this happens in my kitchen, I usually slice the bread thick and grill it, which will revive it beautifully and will give a loaf at least another 4 days of good use.
Or, surprise surprise – I’ll make  Panzanella.
The first written recipe for  Panzanella dates to the 15th century. Originally, stale bread was soaked in water, onions added, then dressed with olive oil, salt and vinegar. This eventually morphed into the modern  Panzanella through the addition of cucumbers and, later-on, tomatoes.
Later still, lettuce, olives, mozzarella, white wine, capers, anchovies, celery, carrots, red wine, red onion, cucumber, tuna, parsley, boiled eggs, mint, bell peppers, lemon juice, and garlic were sometimes added, although traditionalists still prefer the simple version of soaked bread, onions, olive oil, salt, tomatoes and sometimes fresh basil.
If I prepare  Panzanella as a main dish, I usually add boiled eggs, anchovy fillets, capers, garlic paste, roasted marinated peppers and lots of chives and fresh basil and oregano. I don’t soak my Panzanella  in water but rather in a generous amount of dressing of good olive oil, white balsamic vinegar, kosher salt and freshly ground black pepper. I let the salad sit for at least 30 minutes before I dig into it, by which time the dressing has been soaked up by the bread. Usually, I over-eat on this stuff because once I start, I can’t stop until it’s all gone 😦 🙂
However, since I had grilled pork chops with this one, I kept it simple and used only bread, onions, cucumbers, tomatoes, basil and dressing. What a wonderful meal this was…….
So, I hope that next time you have some good, rustic bread which has seen better days, you will give this delicious dish a try 🙂
>
Bon Appétit !   Life is Good !
>
>

>
>
” Braised  beef ribs in red wine with potato gnocchi and vegetables in curry cream ” >
I have prepared beef ribs in many different ways over the years, but , in my humble opinion, this preparation stands high above the rest. Just make sure you don’t skimp on the wine , both the quality and the quantity you use. Use lots of onion and garlic as well and stay away from thickening the sauce with flour ! Just press all the vegetables which you cook in the sauce through a fine mesh sieve, it’s the only thickener the sauce will need. The texture and flavor are just so much better this way. >
.

Season ribs with salt and pepper. Saute ribs in oil until evenly browned on both sides. Remove, set aside. Saute carrots and onions until caramelized. Add garlic and saute until fragrant. Add back ribs. Add celery, tomatoes and wine. Simmer until ribs are very tender but not falling apart. Remove ribs, hold warm. Strain sauce through a fine mesh sieve, then pressing all the vegetables through with a bench scraper. Return sauce to simmer until it has the desired texture. Adjust seasoning if necessary. Return ribs to sauce to re-heat. To serve, place ribs on serving dish, nape generously with sauce and sprinkle with scallions. Serve with potato gnocchi and curried cauliflower/carrots. . >

Last night it was a bone chilling 68 F  outside, (this is Florida, folks),
so  this one-pot meal provided much needed  heat and comfort  🙂
.

Saute onions, carrots, celery, sun dried tomatoes and garlic in butter until onions are translucent. Add curry powder, saute slowly for 30 seconds. Add pork, chicken stock and seasoning. Simmer until pork is tender. Remove pork, set aside, cover so it does not discolor. Add lentils to stock and simmer for 15 minutes. Add potatoes and peppers. Simmer until tender but not falling apart. Blend one quarter of the soup until smooth and thick. Return to pot, add pork and heat through. Adjust seasoning if required. To serve, sprinkle with chicharones.

.
.
Even if you dont like to spend much time in your kitchen on a sunday,
this soup is well worth the 5 minutes prep time and 30 minutes wait until it’s all simmered to perfection.
Happy Sunday   🙂
.

Simmer chicken in lightly salted water until cooked through but still firm.
(No falling of the bone here, that’s overcooked)
Add carrots, leek and celery and simmer until just done.
Remove from heat, add salt, cayenne, lime juice, cauliflower, peppers and tomatoes and let steep for another five minutes.
To serve, sprinkle with cilantro and garnish with lime slices.

All about  MAGGI SEASONING

.
.
This is one of those soups where I have to make enough for two day’s,
because one meal of it’s goodness is just not enough to satisfy the quarterly
craving that  is nagging me    🙂

Add all Ingredients except cream to a large stock pot and simmer for about 2,5 hours.
Blend until VERY smooth. Add cream and simmer for another 15 minutes.
Adjust seasoning and serve.

Note :
Bisques were originally thickened with rice.
This made the bisque smoother and silkier than using flour or other thickeners. 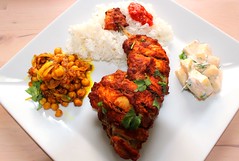 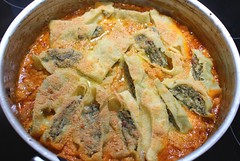 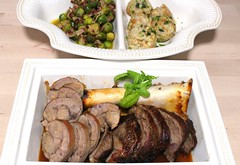 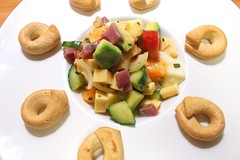