>
>
If  you wonder why I call this dish “old fashioned”, the answer is simple: “It is fully cooked but still juicy”, which is undoubtedly one of the most difficult things to master in good cooking and unfortunately a part of our craft lost to the majority of today’s cooks/ chefs.
In order to cook any food item, especially seafood and poultry, the cook/chef has to take into consideration the carry-over heat of the food item, which will depend on the thickness, cooking temperature, texture, and the time it takes the food from the time it is removed from cooking equipment in the kitchen to being served on a plate and starting to be eaten by the customer. Get this wrong and your dish is ruined! 😦
Old fashioned, because once this was an absolute necessity for any cook to master in order to be rightfully employed in a professional kitchen, while nowadays, sadly, cooks who perfectly have mastered this most important skill are the exception. (Hence, all the undercooked or overcooked meat, seafood, and even vegetables). It is so much easier to rather just “pan sear” a piece of fish than to perfectly cook it. While there certainly is a place and time for sashimi, and one has to admire the chefs who serve it perfectly, the majority of the fish quality served in most restaurants, homes, supermarkets, etc, make this way of serving fish a ridiculous way of trying to cover-up the cooks/chefs inability to cook the fish and other food perfectly.
NO raw fish has the beautiful texture and is as juicy as a perfectly cooked fish! NONE !
And don’t even get me going on half cooked pork or chicken breast 😦
But enough of this, let’s get back to the dish at hand. Instead of the more common teriyaki glaze, I glazed the tuna with hoisin sauce, which was even better, at least for my personal taste.
If you look at the pictures, you will notice that I have not removed the “blood line” from the fillet. When preparing tuna for myself, I always cook the filet with this dark flesh attached. When I was still preparing food in restaurants, I removed this part because the flavor is very strong and some folks don’t like it. (Bella does, so no questions asked at our house 🙂  (Also see note below)
>
Bon Appétit !   Life is Good !
>
Click here for  Steamed Rice Recipe (Fan)  on  ChefsOpinion
>
>
P.S.
“That dark, nearly black area on the side of your tuna or swordfish steak is nothing bad or unhealthy, although you may not like it’s strong flavor. It is a muscle that is rich in myoglobin, a blood pigment. But lest that sound creepy to you, bear in mind that myoglobin is the same iron-containing pigment that makes red meat red.You can leave it in when you cook the fish: the stronger flavor of that small area will not affect the taste of the rest of the fish.”
> 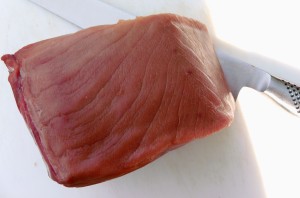 cut filet into 1 inch thick steaks (if you prefer, remove the dark part, season with kosher salt and cayenne pepper 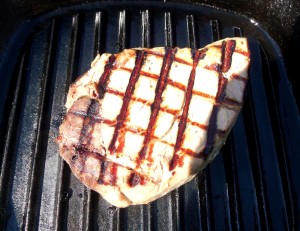 grill to desired doneness; when done, brush generously with hoisin sauce (or teriyaki if you prefer), broil until caramelized

place the tuna on top of the rice, top the tuna with finely sliced scallion and salted radish-slivers 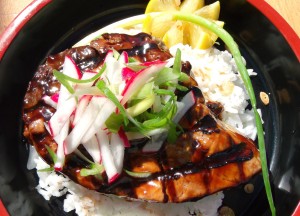 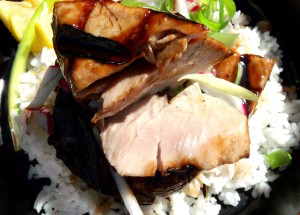 >
>
If  you never tried  Panzanella, chances are that a dish using stale bread is on the bottom of your “must try this” list.
After all, nowadays stale bread is usually used either for bread pudding, bread dumplings, or, most likely of all – thrown into the garbage bin.
Now, I have to admit that most bread you can buy is best thrown away after a few days, since it was nothing special to begin with. But if you are a fan of really good bread, it would pain you to throw away some of it just because it has survived a few more days than usual and has become a bit stale. If this happens in my kitchen, I usually slice the bread thick and grill it, which will revive it beautifully and will give a loaf at least another 4 days of good use.
Or, surprise surprise – I’ll make  Panzanella.
The first written recipe for  Panzanella dates to the 15th century. Originally, stale bread was soaked in water, onions added, then dressed with olive oil, salt and vinegar. This eventually morphed into the modern  Panzanella through the addition of cucumbers and, later-on, tomatoes.
Later still, lettuce, olives, mozzarella, white wine, capers, anchovies, celery, carrots, red wine, red onion, cucumber, tuna, parsley, boiled eggs, mint, bell peppers, lemon juice, and garlic were sometimes added, although traditionalists still prefer the simple version of soaked bread, onions, olive oil, salt, tomatoes and sometimes fresh basil.
If I prepare  Panzanella as a main dish, I usually add boiled eggs, anchovy fillets, capers, garlic paste, roasted marinated peppers and lots of chives and fresh basil and oregano. I don’t soak my Panzanella  in water but rather in a generous amount of dressing of good olive oil, white balsamic vinegar, kosher salt and freshly ground black pepper. I let the salad sit for at least 30 minutes before I dig into it, by which time the dressing has been soaked up by the bread. Usually, I over-eat on this stuff because once I start, I can’t stop until it’s all gone 😦 🙂
However, since I had grilled pork chops with this one, I kept it simple and used only bread, onions, cucumbers, tomatoes, basil and dressing. What a wonderful meal this was…….
So, I hope that next time you have some good, rustic bread which has seen better days, you will give this delicious dish a try 🙂
>
Bon Appétit !   Life is Good !
>
> 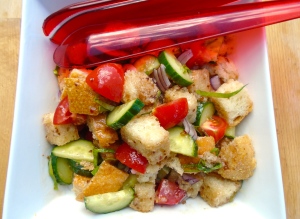 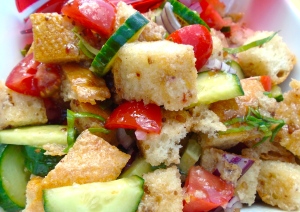 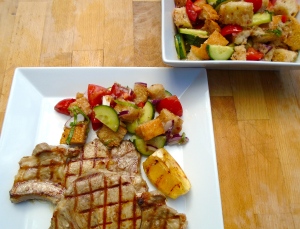 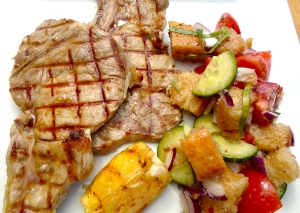 >
>
I am  a big fan of the notion that all food should be as fresh as possible and whenever it is practical, I try to go into that direction. But, alas, sometimes it is just NOT practical. I got home late today, Bella needed her walk right away and by the time I walked her and fed her, it was already 7.00pm. I get up at around 4.00am on weekday’s, so I was pretty beat by 7.00pm. Dinner had to be fast and furious.
Here is what I found in the cup board :
Canned tuna, canned artichokes, canned sun dried tomatoes, mascarpone, dried lasagna pasta, butter, heavy cream, roasted garlick paste  and chives. Add some salt and cayenne pepper and pronto, perfect dinner in ten minutes. 🙂 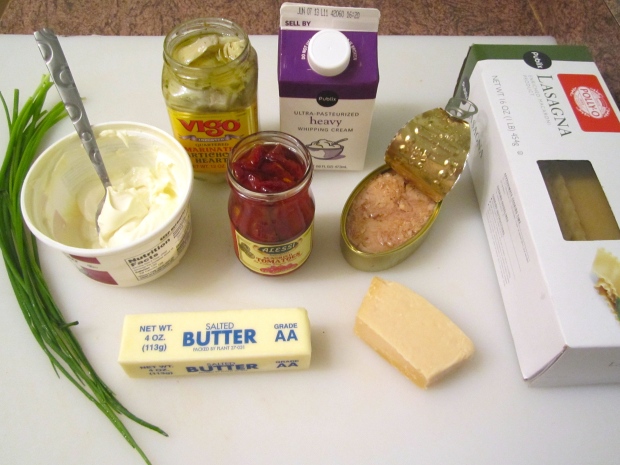 to serve, sprinkle with more chives and grated pecorino romano

Dear Friend’s, to help support this blog, please be so kind and click on the video on the bottom of this page. (You don’t have to watch it, just click once)   Thank you 🙂
>
>
>
>

It never hurt’s to increase our knowledge about the food we eat.
Most of the time it’s possitive, but sometimes it makes me wonder……
– Bananas, Chocolate, Beef, Tuna, Corn, Shrimp ?

What you should know about chocolate,
shrimp and other surprisingly “bad foods.”