>
>
This  dish is one of my  “go to”  dishes when contemplating endlessly without resolve in my mind what I will cook for the next meal.
Although I am a sucker for real curry, pasta sautéed in curry powder and “stuff” is something I can eat happily any time of the day, as often as twice a week.
Usually the basic ingredients are items I have always stocked in my fridge, freezer or cupboard:
Pasta, beef, shrimp or chicken, any type of vegetables, curry powder, a bit of kecap manis, chili paste, soy sauce or maggi seasoning, onion or scallion, eggs and herbs.
An added bonus to this dish is that it reheat’s wonderfully. (Some say it’s even better when re-heated) 🙂
>
Bon Appétit !   Life is Good !
>
>
Click here for more  Pasta  on  ChefsOpinion
>
Click here for more  Curry  on  ChefsOpinion
>
>
> 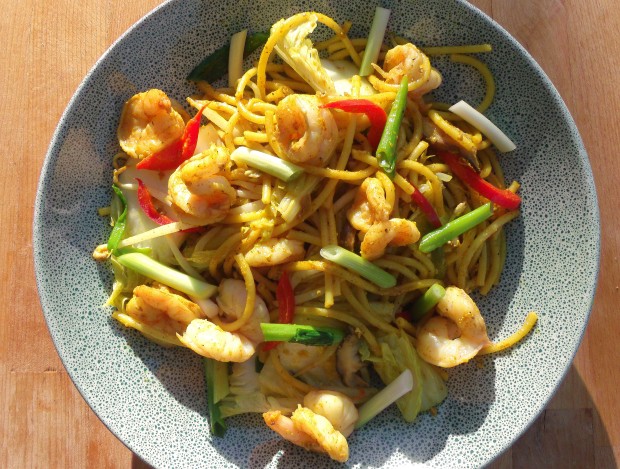 Curried Pasta With Shrimp, Mushrooms, Veggies And Egg (Sunshine On A Plate) 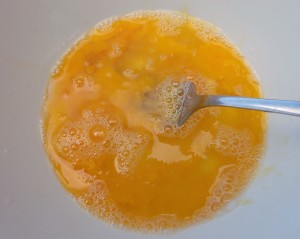 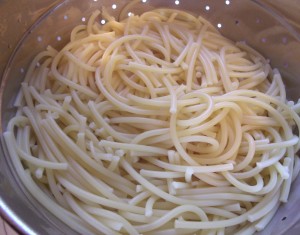 cook and drain 1 lb pasta of your choice

in the remaining butter, saute 1 lb of fresh vegetables of your choice, season with 1 tsp garlic paste, kosher salt and cayenne pepper to taste, remove from pan, reserve 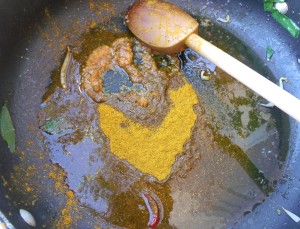 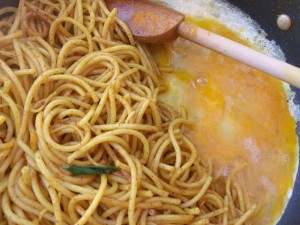 add pasta, mix well, put pasta to one side of the pan, add the eggs, scramble until set 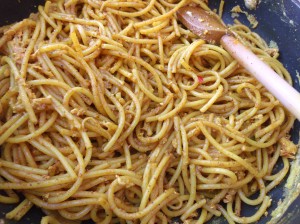 mix the scrambled eggs with the pasta

(Sunshine On A Plate) Curried Pasta With Shrimp, Mushrooms, Veggies And Egg 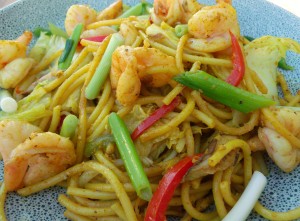 >
>
Throughout all the years I have spent in the food-industry, I came across many folks who proclaimed their jealousy about the fact that I, as a chef, eat better than anybody else they know.
Reading private food blogs, one would assume that this might be the case not only for chefs, but also for food bloggers, since most of the food published at least looks better than what shows up daily on the average household’s table.
While some bloggers are fortunate enough to eat the high level food they publicize on their sites at all times, most of us less fortunate bloggers neither have the time,the money nor the desire to eat gourmet meals for breakfast, lunch and dinner. In my own case, I usually prepare food that is (in my opinion) fit to publish about every other or every third day,  including down to earth comfort food. The rest of the time, I eat the same simple food as most other folks do, although probably prepared with a bit more love and interest in the end result as most home cooks (or chefs at home) will muster day-in and day-out. This however does not mean that the food I don’t publish is poor or crappy.
The meal I had for lunch today is just such an example. I prepare similar noodles quite often, using slightly different ingredients such as different pasta, different veggies and different seasonings (although the seasoning used here is pretty standard for my “Lazy Noodles” dishes). At once extremely simple, easy to prepare and cheap, it is at the same time pretty to look at and super yummy. If prepared with love and attention to detail, food like this does not have to hide itself behind any “gourmet” food 🙂
Not that I want to eat like this all the time, but in reality, food like this makes perfect sense as alternative to the high-end stuff.
>
Bon Appétit !   Life is Good !
>
>
Click here for  Kecap Manis Recipe  on  ChefsOpinion
>
>
Click here for more Udon  on  Chefsopinion
>
>
> 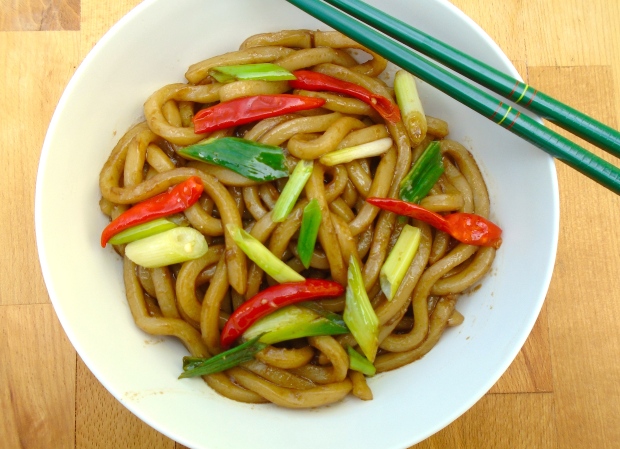 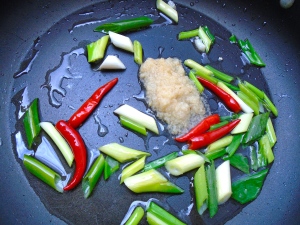 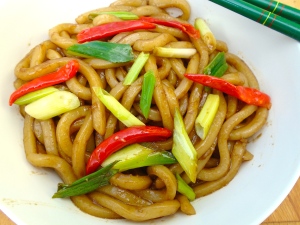 Kecap manis  (ketjap manis), pronounced KEH-chup MAH-nees is an Indonesian sweet soy sauce with a molasses consistency and a dark brown color.
Sometimes flavored with garlic, star anise, chili, five spice powder, etc, the sauce is more syrupy than commonplace soy sauce. Sold in most Asian markets, kecap manis can be used as a condiment or marinade for satay’s and grilled meats or as a dipping sauce. Basically just sweetened soy sauce, it is by far the most popular type of soy sauce used in Indonesian cuisine, where it plays a important role in signature dishes, such as nasi goreng, mie goreng, satay, tongseng and semur.
Sambal kecap is a type of sambal dipping sauce of kecap manis with sliced chili, tomato and shallot, a popular for sate kambing (goat meat satay) and ikan bakar (grilled fish/seafood).
Since soy sauce is of Chinese origin, kecap asin is also an important seasoning in Chinese Indonesian cuisine. It is also a staple ingredient in many other traditional dishes of Indonesia.

Kecap manis is also a staple in my kitchen. I use it mainly for my “lazy meal” day’s, when much cooking is not on my list and a simple plate of stir fried vegetables with mushrooms, noodles or rice mixed with kecap manis, garlic and chili is all that’s on the menu for a quick yet satisfying dinner. I usually have both store-bought and homemade kecap manis in the fridge. When a original recipe calls for it, I use the more complex store-bought version which usually contains star anis, garlic and sometimes other flavor agents.
On the other hand, if I prepare a “lazy meal”, the simple home-made version described below suits me better. I’s not a question of quality but rather a personal taste-preference 🙂
>
Happy Cooking !   Life is Good !

>
P.S.
If you decide to prepare this homemade version of ketsap manis, I highly recommend that you don’t leave the sauce unattended while simmering. If it boils over, the high sugar content makes it a nuisance to clean off the stove 🙂 😦
>
> 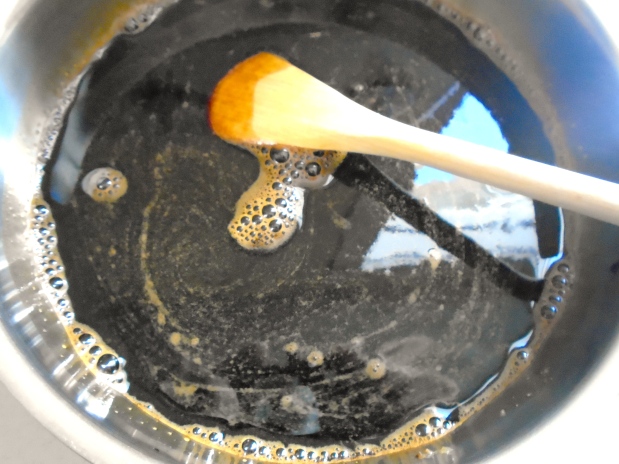 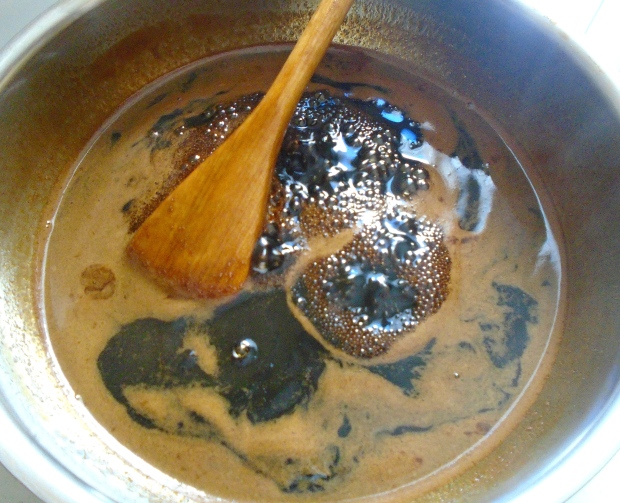 while simmering, skim off all foam that rises to the top; cook sauce until it has the texture of syrup, let cool; it will then further thicken to the texture of thick molasses