>
>
Latkes, kartoffelpuffer, reibekuchen, potato pancakes, bramborák, draniki – a hundred different countries, a hundred different names for the same amazing potato dish. Jewish in origin, it has found its way into a myriad of other cuisines were it has become a beloved dish of longstanding tradition.
Potato pancakes are very popular in Europe and particularly in Germany, where you can find “Puffer Kiosk”s on many streets, at fairs and festivals and of course in many restaurants and in many homes, were they will be served by themself as snack, or accompanied by fruits, or part of savory dishes, with bacon, fish or other proteins.
I have eaten and loved “Kartoffelpuffer ” ever since I had the first ones at our home, lovingly prepared by my mom. At our home they were always served with apple sauce, no exception.
Tilly was not the world’s greatest cook, but she made the best potato pancakes – period. Memories…….. 🙂
>
Bon Appetit !   Life is Good !
>
>
More about ” Latkes ”
>
More “Latkes” on ChefsOpinion
>
Latkes Recipe
>
> 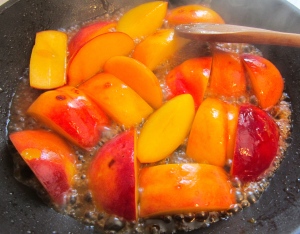 when caramelized, remove from heat, ad a dash of lemon juice and a few drops of organic vanilla extract

saute until golden, flip to other side

saute until cooked through and crisp 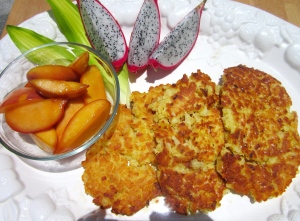