>
>
While a Spanish tortilla is steeped in tradition and has it’s long-standing recipes (usually just thinly sliced potatoes and eggs,) I like to make my own, more elaborate versions by adding “stuff”, such as ham, bacon, vegetables, mushrooms, shrimp, or any other ingredient I find suitable to a dish I love but would find boring after a while had it only the two original ingredients. I justify calling these versions “Tortilla Española” because of the fact that while I was traveling in Spain, I encountered many such versions with different ingredients, all the same called “Tortilla Española”. As for browning the potatoes in the version containing diced potatoes instead of thinly sliced potatoes, this just seems to result in a different texture (better, in my opinion) than if using potatoes without a crispy crust.
I hope the Tortilla Española Purist’s out there will forgive me and everybody else will experiment until they find their own favorite version of this great dish 🙂
>
Bon Appetit !   Life is Good !
>
> 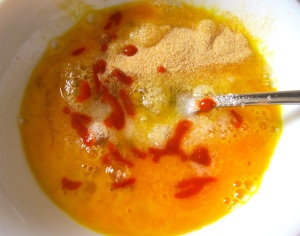 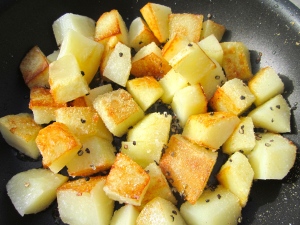 when potatoes are lightly browned, add diced onions, saute until onions are translucent 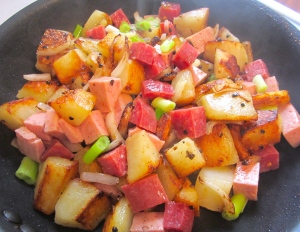 add diced chorizo and sliced scallions ( I also added a bit of leftover mortadela I had in the fridge), saute until sausages start to brown

slide on a plate, flip onto other side and continue to cook in oven until set and golden brown but still moist on the inside 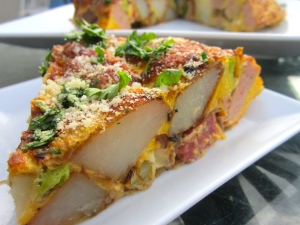