.
.
Today  the weather channel announced that it will get cold in florida,
so why not prepare for it with this goodie :
. 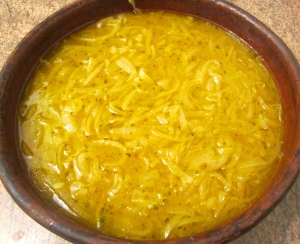 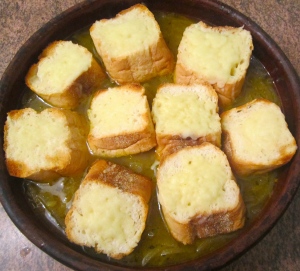 Saute onion julienne until translucent. Add beer,  beef stock,  Kosher salt , freshly ground  black pepper  and maggi seasoning. Simmer until  onions  are soft but not mushy, about one hour. In the meantime, brush  sliced bread  on both sides with  garlic butter. Toast on both sides until golden. Top with your favorite  cheese  (here I used asiago, sometimes I use cheddar, swiss, pepper jack or gorgonzola) and bake until cheese is melted. Remove from oven and set aside. When the onions are soft, adjust seasoning if necessary. Transfer the soup to a heat proof dish. Top with cheese bread and  sprinkle the top generously with more cheese. Bake until a golden brown crust has formed. To serve, sprinkle with chopped cilantro.